From metro connections to a git graph

A few years ago, I was learning Clojure, had read some books and was looking for an interesting project to practice what I've learned. Then I remembered reading about the project MetroGit which consists of building a Git graph from the metro system of Paris. In my opinion, this project is so creative that the original scope could be extended.

Illustration of the idea

In a nutshell, we need to transform a bunch of stations, lines and connections into a git graph. As an example, running the algorithm with this piece of the São Paulo metro system would generate the following shell commands: 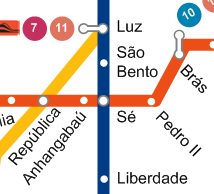 Which produces the following git graph with the git log --graph --all --pretty=oneline command: 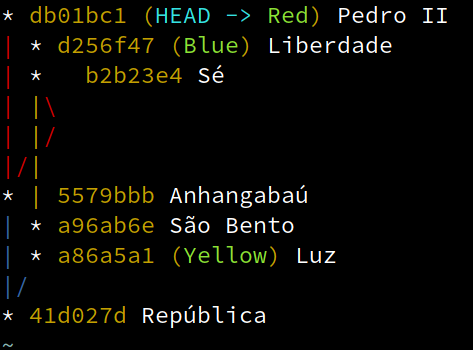 The next sections are gonna focus on the journey of achieving this:

A git graph is a Directed Acyclic Graphs, which means that we need to build a graph with directions from stations and connections and remove the minimum number of cycles in case it's needed.

The data format is simply an array of lines and its stations.

By the way, to avoid the mental overhead, the fictitious lines are gonna be represented with colors and stations with letters.

For Clojure(script), there is an awesome library called loom, which provides an interface for creating and manipulating graphs. Take a look at the examples of some functions we're gonna use in the future.

First of all, let's deal with the easiest type of metro configuration, the one without cycles.

The code receives some input data, creates a new loom graph from the connections and store the line as attributes of each station/node.

It yields the following graph:

The violet station is a connection between a red and blue station.

Before start removing connections for cyclic graphs, we could try to tackle the problem with a less damaging approach.

As we all know metro lines are bidirectional, which makes sense because imagine taking the subway in the morning and having to get a taxi to come back home at the end of the day. So, the alternative here is that if a new line introduces a cycle, all the connections of that specific line could be reversed.

Keep in mind that the call to loom.graph/dag? represents the most expensive operation of the algorithm. It does a Topological Sorting to confirm if the graph is a DAG or not. It takes O(E+V), where E (edges) are the stations and V (vertex) are the connections among them. Therefore, this algorithm run in O(Line*(Stations+Connections)).

Here is the graph with a cycle

Notice that with the new algorithm the B station connects to the D station, not A anymore.

If there are still cycles even after reversing the station lines, the last resort would be to remove the connection that introduced a cycle.

The goal is to check if there is a cycle in each addition of a connection. In case it's positive, we skip the destination station and the subsequent one forms a connection with the origin.

Notice that the removal of the cycle is executed only after trying to revert the connections.

The algorithm is costly O(E*(V+E)) or O(Connections*(Stations+Connection)) and it's not ideal, however we're dealing, at worst case, with thousands of connections and stations, so it's something we should not worry about for now.

As an example, this algorithm removed only 4 of 496 connections in the wide New York subway system.

After running the algorithm, D->A connection is removed.

We wrote the algorithm to build a DAG removing the minimum number of connections. Now it's time to focus on the traversal of this graph.

This section focuses only on the traversal algorithm and not yet on the command generation. It's wise to decouple these two components otherwise, the process will get too convoluted.

Now, back to business, these are the requirements to perform this traversal in order to make the construction of the git commands possible:

Don't feel overwhelmed by all of these rules. It seems complicated, but the constraints are gonna be introduced gradually.

Input and output of the function

Instead of having an Iterator or something similar, the idea is to have a function call that receives a state of current visited station and lines and a graph. After the processing logic, a new state is returned with the new visited station and the new graph. When nil is returned, we reach the end of the algorithm. This behavior is similar to a reducer in the redux library.

The next sections implement the traverse-graph function.

Always the simplest case first: a subway configuration with only one line.

Since we're just warming up, this single iteration returns a new state with the current-node passed as argument without worrying about successors and predecessors.

As mentioned, it's just returning the same station every time, but that's just an introduction of the function behavior.

The algorithm now is at least coming back to the initial station.

Now it's time to add the condition that if the current station was already visited, then the successors are evaluated.

Cool. It worked already for a single line, but the algorithm is still not taking into account connections and multiple lines.

Just out of curiosity, let's try to run the current state of the algorithm in a configuration with multiple lines.

The stations of other lines are not taken into consideration when a line doesn't have more unvisited stations. To solve this, we need to introduce a new data structure which holds the stations that are still waiting to be visited, the so-called pending nodes.

With this changed code, notice that after the green line doesn't more station to visit, we also take the other stations of the red line into account.

Everything comes to an end

All the recursive algorithms need a stop case otherwise they run indefinitely.

For this case, when the line doesn't have more unvisited and pending stations, we add a new key end to the returned state. In the next iteration, nil is returned if this key is present.

Helper function to bootstrap the process

One downside of this approach is that the initial state must contain boilerplate data such as pending-nodes, current-node, etc. To alleviate this problem, we can encapsulate this data handling into its own bootstrap function.

This is not the best API, but don't worry because in the last section we're improving the API of the whole process.

The last piece of the puzzle is to create one or more git commands for each new iterated station of the traversal.

So, for each iterated station essentially the algorithm needs to perform two tasks in this order:

In the switching branch phase we need to point the HEAD to the proper branch:

In the command generation phase:

Again, starting with the simplest case, which is a single line that yields only checkout and commit commands.

Just bare in mind that this function only receives commit names and branches and it's totally decoupled from the traversal algorithm. Later on, we're gonna plug them together.

If a tree falls in the woods, does it make a sound?
If a pure function mutates some local data in order to produce an immutable return value, is that ok?

When dealing with multiple branches, we need to keep track of where HEAD is pointing and the last commit that all branches are pointing to.

Instead of using a real git repository to manage branches and commits, we can represent this state as a plain old Clojure(script) map. Each new iteration can update this map with the current state of branches and commits. Basically, our "fake" repo can be represented as:

A quick remark is that the head variable points to a branch because we need to check if a checkout command is required. Besides, we store only the last commit of the branch to decide if a merge commit should be generated.

At the beginning of the algorithm, we need to decide where to point the HEAD. The order of priority is: (1) the current branch, (2) a branch that already exists and (3) any other branch.

When the iterated station is a connection (multiple branches) and they're coming from different commits, we generate a merge commit to join them.

When multiple lines are coming from the same station, we can't generate a merge commit because these branches are not divergent. If we attempt to merge them, then git will raise the famous Already up to date message.

To identify these cases, we can check if the iterated lines are simply not inside the merging branches set.

Fitting the pieces together

Now that all of the small pieces were introduced, we can fill the gaps and assemble all the pieces into the final implementation.

Improving the API with seq abstraction

One fact we can all agree on is that the current API to generate these commands really sucks. The client needs to call a lot of boilerplate functions to get the job done. Also, a lot of internal information, like the state of the traversal algorithm and the git repository, is being exposed in those calls. The clients of this program are only interested in one thing: generate the git commands from a metro configuration.

Fortunately, Clojure gets our back.

It's possible to produce our own custom collection-like by creating a new type using the deftype function. This new type implements the methods from the ISeq interface in Cloujure or overrides the protocols ISeq, INext and ISeqable in Clojurescript.

In return, Clojure(script) only requires the implementation of 4 functions:

We now have a straightforward and encapsulated way of creating the graph and generating the git commands from its traversal. However the most important part is to reuse a lot of ready-made functions that we all learned to love from Clojure.

And the most important part is creating a new file with the git commands.

Now we've accomplished the goal of transforming some input data into a git repository from any metro system.

We reached the end of the journey of mapping git commands from a metro system. I hope it was a pleasant experience and you've learned something new just as I did.

If you're interested, the code for the project metro-clojure is in github. If you want to, you can open an issue requesting a new city.

Also, sorry for the CPU usage of the animations. ;)